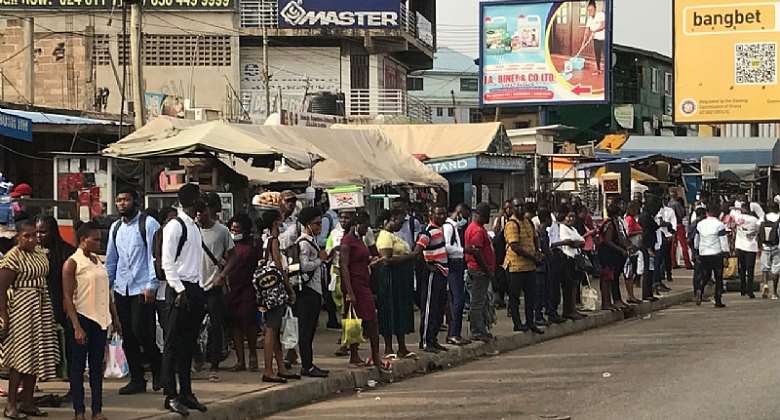 Scores of Ghanaians have been left stranded at Lapaz in the Greater Accra Region following a decision by the Commercial Transport Operators in the country to begin a strike action today.

Commercial Driver Unions in the country in the past few weeks warned that members will stage a strike action if the government fails to reduce the rising prices of fuel in the country.

Today, all trotro drivers have complied with a directive from their unions and have decided not to work.

Ghanaians including public and private sector workers walked to their transport stations, bus terminals and bus stop this Monday morning with no vehicle available.

They have been left stranded at lorry stations and along the roadside still hoping to get a vehicle to get to their various workplaces.

Agya Appiah, a driver who spoke to Modernghana News this morning said; “We are not working today. We want the government to reduce the price of fuel. It is too much. We have started today and we don’t know when we will resume work. We are okay with the strike and we will only resume when government addresses our concerns.”

Some of the stranded workers engaged expressed worry and pleaded with the government to address the concerns of commercial transport drivers so they return to work tomorrow.

Others who were angry blasted the drivers while accusing them of being greedy and only seeking their selfish interests.

Speaking to one nurse who gave her name as Miriam, she said; “No car is going today. I have been here for the past one hour and I don’t know how I will get to work today.”

Although vehicles were at the station, drivers said they will not work today unless their concerns are addressed and leaders of the various unions give the directive for them to resume work.