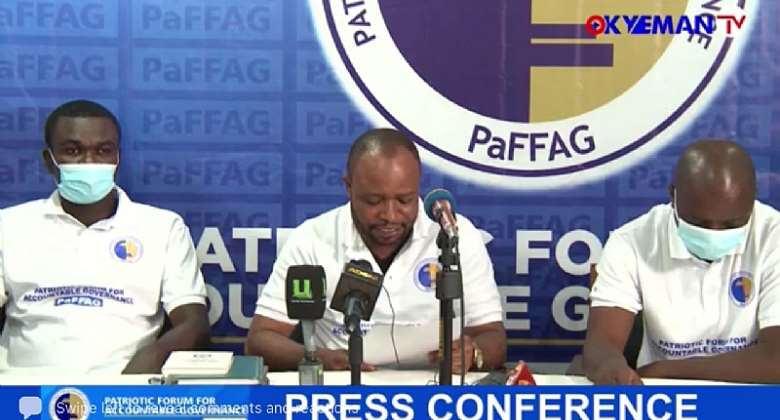 The Patriotic Forum For Accountable Governance (PaFFAG), is accusing Speaker of Parliament, Rt. Hon. Alban Bagbin of trying to pay the Finance Minister back for refusing to allocate a budget sum of Ghc1.7 billion he requested for the House.

According to the forum, the reluctance of the Speaker in ensuring the passage of the 2022 Budget Statement is due to the refusal of Mr. Ken Ofori Atta and his team to allocate the said amount.

At a press conference in Accra on Monday, the Civil Society Organization (CSO) expressed joy that the Finance Minister was courageous to refuse the amount noting that it could be used to undertake several developmental projects.

“Like we are all aware, parliament’s primary duties is to enact laws. They do not execute developmental projects. Parliament does not build roads, construct hospitals, provide educational infrastructure, establish factories yet the speaker is demanding a whooping Gh¢1.75 billion under the guise of parliamentary business.

“The 2022 budget when approved by parliament is going to cater for the feeding of poor and needy Ghanaian school children who live in the constituencies of some of these MPs championing the rejection through the school feeding program. By inference, a rejection of the budget means these innocent school kids should not be fed. Is this what a social Democratic Party like NDC should stand for?”

According to them, even though they believe the 1.75 per cent E-Levy is “undoubtedly” a good policy, it is “bad politics” hence called on the government to reconsider the decision by reaching a compromise to reduce the levy from 1.75 per cent to 1 per cent.

“We know this government is a listening one and that it considers the feedback from her citizens essential. A 1 per cent E- levy would rather mitigate the plight of Ghanaians and at the same time achieve the purpose for which it is to be implemented.

“We note that the e-Levy alone is projected to contribute as much as GHc7.0 billion (or 8.7%) of the total tax revenue of GH¢80.2 billion projected for 2022. Further, customers will be paying the 1.75% levy on MoMo transactions in addition to the 1.0% already levied by telcos, bringing the total levy to 2.75%. To ease the burden on customers and avoid any negative reactions, we would propose 1 per cent for the e-Levy, bringing the total levy to 2 per cent.”