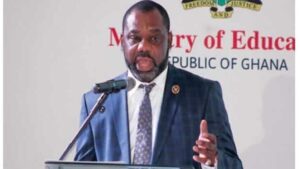 The Manhyia South MP announced this during his address at the third edition of the Nation Building Updates held in Accra on Tuesday with the theme “Investing in Education, Investing in the Future,”

Dr Matthew Opoku Prempeh further disclosed that a student would only need a Ghana Card to secure a student’s loan with no guarantor if the New Patriotic Party government is given another four-year term.