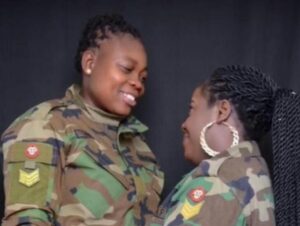 This comes up after a video of the two military lesbians went viral today on social media. We gathered that the commanding officer at Michelle camp was called today by the military top hierarchy to apply the whip after the video came to their notice.

In the viral video, the two women were seen dancing to “anadwo black love” song by the multi-award winning rapper, Sarkodie.

The two were styled in local fabrics with same colors and had two change of clothes; one is clothed in a long white and red lace dress whilst the other is in trousers and top, depicting their roles as bride and groom.

The alleged couples were not only seen in the ceremony but had witnesses and attendees at their marriage.

The video sparked lots of controversies and left some Ghanaians mouth agape as the military women couple were filled with merriment at their marriage ceremony with the witnesses and attendees cheering them on.

Most people who wore their religious spectacle began preaching about the end time after watching the video.

They encouraged the government and the security agents to take action before the alleged ungodly beings destroy the peace of the country.

They asserted that the people of Sodom and Gomorrah evoke the wrath of God with similar sin and urged the religious leaders to deepen their teachings against homosexuality.

“This is a wake up call for Ghana to pray hard especially during this elections season to ensure there will be peace in the country because lesbianism and gay marriage can cause chaos in the country,” they asserted.

Homosexuality has been vehemently opposed in most African countries particularly Ghana and Nigeria.

Discrimination against same-sex relationships in this part of the world is quite on the rise.

Currently, under Ghanaian criminal law (Chapter 6 of the Criminal Code, 1960, as amended by The Criminal Code (Amendment) Act, 2003) same-sex sexual activity among males is illegal.

Meanwhile Legal Practitioner Moses Foh-Amoaning who is an anti-gay rights activist believes those in the Western world who were forcing Ghana to legalise same-sex marriage were ignorant and disrespectful by suggesting to help African Countries including Ghana change its laws against homosexuality.

He believes homosexuals have a problem which should be identified and strategic steps taken to help them out of it.

“When Theresa May says that the British gave us a law 40-50 years ago and that law was wrong and that they will help us to change it, what you forget is that before the English brought the law, we had our own law, we Africans we live our culture, our customary law and that’s who we are and it is against it”

Our view is Africans don’t believe in it, we don’t think it is right, if somebody has got that penchant, we help that person, we don’t throw him out, we don’t cut off his head, we don’t beat him up but the propaganda from the Western media is that we are killing them, of course if you do something and it is not right, society will react, if they criminalise polygamy and we say we don’t like homosexual rights, why do they say it is discriminatory,” he said.

Military Authority to apply the whip after two military lesbians tie the knot.

Other Posts : B4Bonah Got Fans Worried With His Latest Photos