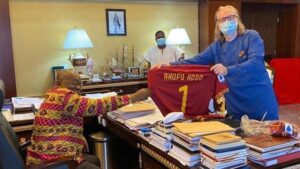 The gesture is to appreciate the love by the first gentleman of the Republic to the team since it started playing in the league.

On a short occasion to honour the President, Accredited Ghanaian Consul to Italy, Massimiliano Taricone did the presentation on behalf of AS Roma.

The Ghanaian leader’s love for the club dates back in the last decades when he developed an interest in the foreign leagues including the champions league.

AS Roma was founded in 1927 when Italo Foschi initiated the merger of three old Italian Championship clubs from the city of Rome.

The President of the Republic of Ghana, Nana Akufo-Addo, was today presented with a special AS Roma home shirt.

The shirt was delivered to @NAkufoAddo on behalf of #ASRoma by @consoleghana's Massimiliano C. Taricone 🤝 pic.twitter.com/JFbYJOosqY

Other stories : “Your Eyes Like Frog” – Patapaa Disses Lil Win Again In A New Video (watch)

Download all the latest hip hop songs and albums