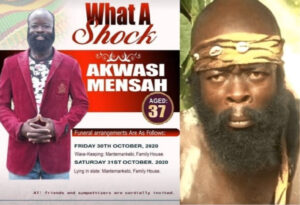 Earlier this week, reports about the actor’s death went viral after his obituary surfaced on the internet.

However, the comic actor has come out to deny reports of his alleged death on social media.

In an interview with colleague actor, Joe Shortingo, Sekyere Amankwah disclosed that the purported obituary was meant for a shoot in a new series he is casting in.

He explained that the graphic designer leaked the artwork on social media for mischievous purposes.

He added that the name on the poster is not his original name but rather the name of the character he was playing in the movie.

Sekyere Amankwah also revealed that he has received numerous calls from loved ones after the poster went viral. I am not dead – Kumawood actor Sekyere Amankwa.

Other Posts : Moesha Buodong Ready To Harvest Laycon’s BBNaija Money By All Means