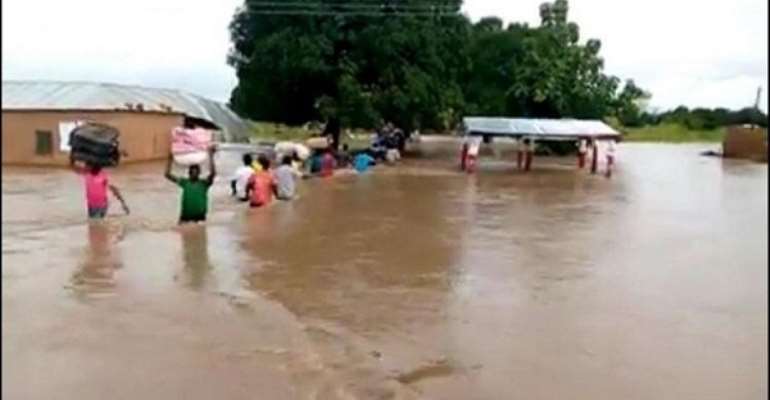 A 10-year-old girl has reportedly died after drowning in flood water following the heavy downpour in Koforidua in the Eastern Region on Tuesday, October 19, 2021.

Checks revealed that the unfortunate incident happened in a town called ‘Anlo-town’, one of the surrounding towns of Koforidua.

Information gathered indicates that she was with her sister after school when she lost her footing and slipped into the Nsukwao stream.

The stream which had been overflown due to the heavy rains yesterday carried the school girl away amid screams from her sister.

Confirming what had happened in an interview with Citi FM, Mr. Bernard Acheampong who is the Assembly Member of the area narrated, “I had a distress call from one of my unit committee members that a girl who was coming from school had fallen into the Nsukwao stream and cannot be found, so I quickly reported to the police and NADMO, and we went to the scene to begin a rescue operation where we did all our best, but we couldn’t find the body.”

He continued, “According to people who were around the area, the incident happened about 2:00 pm when the girl who in the company of her younger sister on their way from school got to the stream and decided to catch a glimpse of how the floodwaters were flowing through the drainage as a result of the downpour”.

“She accidentally tripped over as they were playing and fell into the drainage and that was how she got drowned. A guy who heard the shout of her sister rushed into the stream and tried to rescue her, and managed to grab her at first but the speed and severity of the flow almost got him also carried away, and so he lost hold of the girl but managed to climb up.”

A rescue team is still combing the Nsukwao stream in search of the body of the 10-year-old girl.