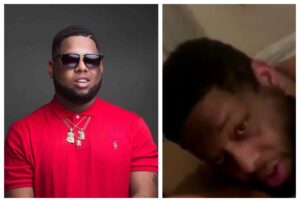 Breaking News : Part 2 Of D-Black’s “S#xTape” Officially Released. Just when you thought the calm is now there goes the fire. The much talked about part 2 of D-Black’s hot “Atopa S#xTape” with an alleged white woman is officially here for your viewing pleasure.

This part goes deep to exploit how much on a legend D-Black is in licking. It explains why he can even get a hit song despite building a massive trend for himself and taking advantage to release a song.

It’s been almost a week and his music video is yet to clock a 100,000 steams. No long talks. Just spy the video from the provided links below and don’t forget to share. Breaking News : Part 2 Of D-Black’s “S#xTape” Officially Released.

Other Posts : Construction of film village has no venue yet – Tourism Minister