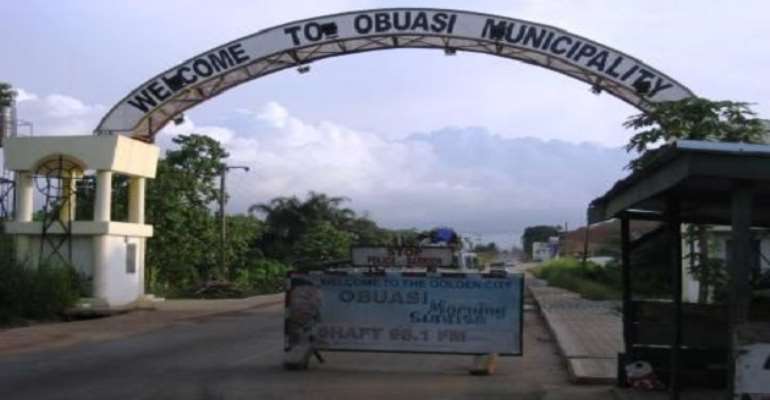 A close monitoring of the affairs in Obuasi, Ghana’s leading gold producing city shows the residents are not happy about their life in terms of social and infrastructural development.

This was revealed during a fact-finding mission by this correspondent who was in the town to ascertain the situation on the grounds which according to the residents are matters of national interest government must intervene.

According to the residents, Obuasi is known to be a leading gold-producing town in the country which allegedly produces almost 70 percent of the country’s gold extracts, unfortunately, infrastructural development have eluded them for many years.

Speaking to this correspondent in an interview at Pomposo, a suburb of Obuasi about the issue, Mr Kwasi Takyi expressed worry about the developmental challenges confronting the town, adding that for some years now no government has made any serious attempt to see to the proper development of Obuasi.

Takyi stated that aside what the late Dr. Osagyefo Kwame Nkrumah achieved for the town, no successive governments can boast of any project in the town, stressing that it is only God who knows what they go through in their daily life.

Mr Takyi mentioned the lack of adequate school structures, bad roads, contaminated water, health, recreational centres, factories for job creation, environmental issues such as air pollution and other infrastructural facilities as some of the major challenges confronting the people of Obuasi.

A lady who identified herself as Madam Ekua Serwa, an operator of a local eatery at Obuasi Brahabebome said government must find solution to the endemic problems at Obuasi since the issue doesn’t speak well of the city which is regarded as the leading gold producer in the country.

Another resident Kwame Agekum of Obuasi Akaporiso in an answer to a question indicated that several demonstrations over the past have heeded no answer to their plight. “We only look up to God to save us.”

Mr Bright Oppong, a resident of Obuasi Bogobirim noted that the only way to solve the problems within Obuasi is to continue to engage in demonstrations since that was the only language government understands.

“For the fact that Obuasi is the pillar behind the development of the country we should leave alone those government officials who are responsible for the development aspects of the country, since you can force a horse to the riverside, but you cannot force it to drink,” Wofa Kwabina Asomani, a resident at Obuasi junction on the Kumasi- Dunkwa-on -Offin road indicated.